This is a regular news post about the IW development. Let’s look together at what has been done so far and what’s on the menu for the near future. Starting now!

Before everything, we’re sharing the preview for one of the new locations that will be added soon. This time it’s the dorm entrance of the fair and patient house Hufflepuff. This preview is work in progress and will be expanded with additional easter eggs and references to other universes. However, there are some that are already present on it, try to find all of them! 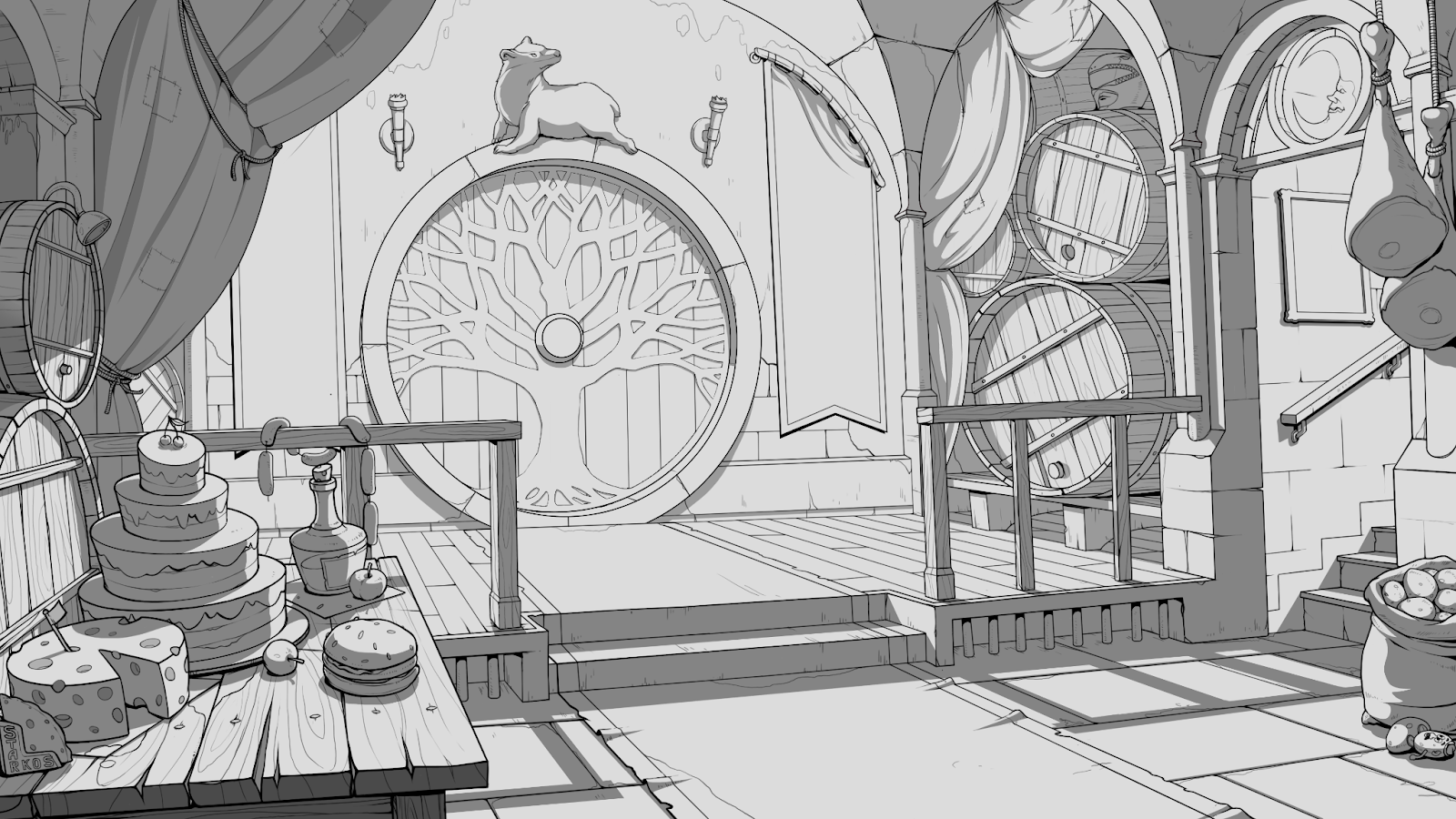 In the previous news post we’ve outlined several goals for the development window (20th-31th of July). Let’s look at the status of these goals. The following has been done so far:

In parallel we’re also working on updating the builder for the game, which compiles the game and saves it in the format for the end-users. At the moment, the whole process of creating game distributions is very cumbersome and takes a considerable amount of time. We intend to fix it by parallelizing the build process for different platforms so that it happens at the same time, and in the end puts all the files into the correct places. The only step that we will need to do manually is to upload it to our servers so that the players are able to download the game. This step can be semi-automated too and we will explore how we can achieve that in the future. Long story short, this change will additionally reduce the time we spend on technical steps and will ultimately lead to faster release cycles.

Let’s now look at what’s planned for the next 10 days development cycle:

This list is not exhaustive and other minor (or possibly major) tasks are planned to be completed during this time.

A couple of words regarding the updated chapter 4 in the upcoming update. The main focus of this chapter is to solve the prefect's problem with their Consilium, and at the same time to become closer with them in order to get more power within Hogwarts. As we stated earlier, the stage with the swimsuits will be somewhat streamlined, which means that it won’t take as many precise and time sensitive actions as before. The players will be able to choose if they want to do the whole process semi-manually, kinda in the same manner as it happens now in the game, or to achieve the goal through others. By choosing the second option, the players will still have to spend some time on either training their stats, earning galleons and persuading other characters, but the complicated step with manual copying and placement of the swimsuits will be mostly skipped.

In addition, we always wanted to have a scene in the prefects’ bathrooms, where the players could enjoy beautiful and sexy bodies without forcing the girls to undress before Marcus, much like in “hot spring” scenes in other eroge games. Since we’re updating this chapter now, we have the opportunity to add such a scene in the next release. It will include a new art for the prefects’ bathrooms in the background, which we will most probably share with you as a preview in one of the following news posts. Due to pretty tight deadlines, we won’t be able to create a completely new fullscreen scene with four prefects and variations, so we will reuse some of the existing art in order to finish the version a bit earlier. The art will still be juicy however, just like we all like it :)

On top of this we have finally finished updating the community translations project. Here are the main points:

We also compiled a short list of general guidelines for you to follow if you want your translations to be correctly identified and accepted by the game:

More info is available here - https://www.teamsadcrab.com/community-translation-project-for-innocent-witches/. If you have any question regarding community translations, please visit our Discord and let us know in a special channel called #translations.

And finally, the voting round! This time it will be a question regarding the art and consistency. We often get suggestions regarding additional costumes and modifications for the characters, but most of the time they create conflicts with the existing art in a form of inconsistency. For example, we could add the possibility to add and customize pubic hair for the girls. However, then we have a problem where the art for minions, events and other scenes will need to be updated too with all the customizations in place. And this will need to happen for all future scenes and pieces of art to keep things consistent. Such things very quickly pile on and in the end all these small variations take a lot of time to implement. But then we have a second option, which is to add the customizations to some pieces of art, but not for all. For example, pubic hair can be added / changed on the fullscreen character art, but not in the scenes, i.e. it will always be the same regardless of what type of pubic hair the character has currently selected by the player. Our question therefore is, would you want absolute consistency when it comes to such variations, or would you be fine if some of the art pieces are not consistent with the player's customization choices? Please let us know below!

That’s all for now, folks! Thanks for sticking around. Be sure to check out our Discord and Patreon for more news and art previews :) As always, we are very grateful for your support and happy to work on the product that both us and our player like so much <3 More to come in the future ;)

Download Now
On Sale!
50% Off
Name your own price

Innocent witches is a rendition of the story of the boy who lived. A bit brighter, more lustrous, and more lustful.

I'm fine with minor inconsistencies for now. I was curious is it possible to perhaps program a layer with those choices in? Just a random thought.

I love it when you guys are very dedicated to make this game better and it will paid well. The only thing that you guys need to improve was the speed of loading the game itself still too slow compared to other games with similar tags, especially interaction and transistion between menu move like a snail. Thats the only issue we have right now and rest of them already in good shape.

If reading this already gets me excited for the new content, I can't imagine how I'm gonna be when playing. Thanks for such a incredible game and amazing work.

Thanks for the update.